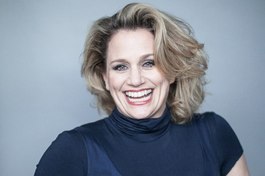 Cady Huffman is perhaps best known for her Tony, Drama Desk and Outer Critics Circle Award winning performance as “Ulla” in The Producers on Broadway opposite Nathan Lane and Matthew Broderick. This led to her unforgettable recurring role on HBO’s Curb Your Enthusiasm where she almost became Larry David’s 10th anniversary present. This success also brought her to the Food Network’s kitchen stadium where she judged for 10 consecutive seasons on Iron Chef America.

Cady’s  other Broadway credits are her Tony-nominated performance as Ziegfeld’s Favorite in THE WILL ROGERS FOLLIES, her Outer Critics’ Circle Award nominated performance as Sylvie in THE NANCE, the original production of LA CAGE AUX FOLLES, CHICAGO, STEEL PIER, DAME EDNA: THE ROYAL TOUR, and Bob Fosse’s last original musical BIG DEAL. She has had several guest starring appearances on television, including  recurring roles on The Good Wife and Blue Bloods,  Younger, Madam Secretary, Master of None, Difficult People, Law & Order: SVU, Law & Order: CI, Law & Order: Trial By Jury, Frasier and Mad About You. She even showed up on Daytime’s One Life To Live  as the 2nd Dr. Paige Miller.

Cady is currently nominated for an Emmy Award for her work on the digital series AFTER FOREVER, for which she won the 2018 IAWT Award. She created and stars in her own digital series titled CADY DID, which will be released in the near future. Her one-woman show MISS PEGGY LEE will premier June 10 and 12 at Green Room 42. She will be performing her cabaret TOMBOY SHOWGIRL at 801 Supper Club in Saratoga Springs on June 27. She is directing THE CURIOUS INCIDENT OF THE DOG IN THE NIGHT TIME at Weathervane Theater, summer 2019. She is most grateful for the many ups and downs of life which have taught her “Don’t take it personally” and “Love is all there is”. She is a proud union member of 36 years. @CadyHuffman CadyDid.tv

For playing the original Ulla in the Broadway musical “The Producers”

For playing the original Ulla in the Broadway musical “The Producers”

Home of web series Cady Did